The Mortal Thoughts of Lady Macbeth 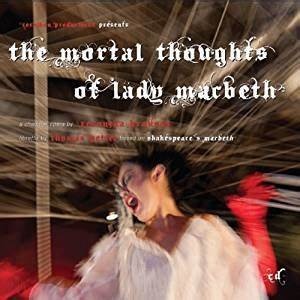 The action begins with the three witches invoking a spell that will set in motion the series of inevitable and bloody events. Lady Macbeth recounts her husband's encounter with these same witches, who predicted his ultimate ascent to king. She invokes spirits to "unsex" her, enabling her to murder King Duncan and facilitate her husband's ascent. Her initial resolve falls away: she witnesses Macbeth kill the king and is horrified by the deed. The witches enter again with their magical incantations - "Double, double toil and trouble, fire burn and cauldron bubble" - while Lady Macbeth descends into madness, attempting to wash the blood from her hands. The work concludes with the witches leading her "to the rooky wood" and handing her a knife, with which she slits her throat.

The Mortal Thoughts of Lady Macbeth is an opera inspired by Shakespeare's Macbeth.

The text deals specifically with the character of Lady Macbeth and her metamorphosis from greed for power through conflicting feelings over the murder of Duncan and ending with her final descent into madness and suicide. The other characters extracted from the play are the three witches. They have a two-fold purpose. Firstly, as representations of fate, they provide neutral commentary. Second, they function as a layer in the instrumental fabric. Inherent in the concept of fate is the tertiary division into past, present and future that manifests structurally on both macro- and micro-levels. There are three main sections to this work each of which further subdivides into three. Each of the witches' iterations also reflects this ternary division with canonic entries representing the swirling of the witches' spells and the stirring of the cauldron. The text itself has three functions: as narrative, an additional instrumental timbre, and the basis for the isorhythmic structure in the work.

NB: The witches may be performed with any vocal range (adjusting down an octave).

REVIEWS of Fort Worth Opera's performance: